Does Orly Taitz Censor Her Comments?

Once Orly Taitz made her second misinformed post about Charles Payne, I took the opportunity to post the first comment in the thread, linking to the article she was citing and disproving what she claimed it said. I posted the following:

Do I have any newspaper articles from October 21-22? Yes. I have the exact Seattle Times article you (and Buelah) are referencing:

IT DOESN'T SAY THAT CHARLES PAYNE DIED. To the contrary, it has a couple of quotes from Mr. Payne regarding his sister.

So even though you say "The Seattle times ran an article showing Charles Payne, Madelyn Payne Dunham's brother dying Oct 22, 2008," that's completely false. You obviously haven't even looked at the article you're talking about, and yet you're citing it as a source. Heck, you've already made TWO posts about it, without doing even any cursory research or fact-checking.

It's harsh, I know. But it's completely true; she clearly hadn't read the article she was relying on. The second post in the thread was something of a response to mine, saying that if he's alive, then he can be contacted.

So I went to supper, and when I got home, both my comment and the second comment have disappeared. If I didn't know better, I'd say Ms. Taitz was censoring her comment threads.

To test this theory, I reposted my comment, and this time, I took a screenshot for good measure: 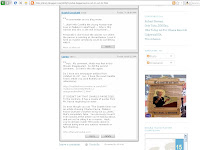 Now to sit back and see if this comment disappears too.
Posted by Loren at 8:08 PM