Just When You Think They Can't Get More Incompetent...

Not stupid. Not gullible. Not paranoid. Just plain incompetent:

A reader Linda sent me this birthdatabase.com, it shows Obama being born in Somerville, MA...

FREE Birthday Search
Can't remember the birthday of a friend, relative or co-worker?
Search our database of 120 million names and birth dates:

First Name Last Name Estimated Age
Note: Our information comes from official government records so it is best to search using the person's full first name, like Robert instead of Rob or Joseph instead of Joe. But, if you do not find their birthday after your first search, try again using their shorter first name. Also, the City/State/Zip shown in our results may not be current. It is what was listed on file at the time our data collected, and just used to help you identify the correct person.

There's a lot of great nonsense in the middle, but for the moment I want to focus on this one tidbit that opens and closes Orly's post. Go check out http://birthdatabase.com/ for yourself if you're curious. But a simple glance at the site, or at the text Orly herself quoted above, should show you where the incompetence kicks in on this. I'll quote it again, in case you missed it:

"the City/State/Zip shown in our results may not be current. It is what was listed on file at the time our data collected, and just used to help you identify the correct person."

IT'S A CURRENT ADDRESS, NOT A BIRTHPLACE! The website says so itself. Orly herself quoted the text saying so. How can she (and her readers, who haven't pointed this out in the comments) completely ignore that, and pretend like the site is claiming Obama was "born in Somerville, MA"? The guy lived there in college, and the fact that that's the last listed address the website has is only testimony to the limits of their data. Not only does Orly seem incapable of fact-checking simple material she's been forwarded, she now seems incapable of even noticing when she's disproved her own argument within her own post.

If you need further proof, look no further: 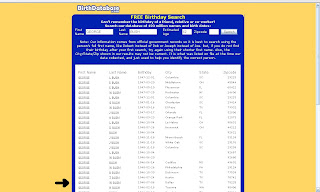 Yes, although the White House website states that President George W. Bush "was born on July 6, 1946, in New Haven, Connecticut," the location listed by his name in Birthdatabase.com is "Dallas, Texas."

But according to Orly's reasoning...what does George W. Bush have to hide? Why is he claiming, on his official government website no less, that he was born in Connecticut when a free internet database says "Dallas, Texas" by his name? Yeah, it doesn't actually say he was born there, and yeah, it actually says that's his last address (not his first), but that's irrelevant. No Texas-born person would ever claim to be born in Connecticut unless they had something seriously sinister to hide. So what is George W. Bush hiding with regard to his birthplace? Constitution-loving Americans demand answers!
Posted by Loren at 8:52 PM