Paul Broun is Still a Birther

Jason provided Broun with a chance to clear the air on this, asking him straightforwardly, "Do you believe the President's citizenship is in question?" Broun's response to that yes/no question was an unfocused three-minute-long ramble that discussed everything from health care to Argentina. Broun claimed that he is not questioning Obama's citizenship ("because I've not gotten engaged in all that"), but wraps up by saying:

"That's what I said when I was asked: I don't know, nobody knows for sure, we've not seen any documentation one way or the other."

Like Nathan Deal, Broun has resorted to weasel code. "We've not seen any documentation?" Horse-apples.

Thus, Broun's claim that "we've not seen any documentation" can mean only one of two things. One possibility is that he is ignorant of all of this evidence. I find this doubtful, considering that in the same interview, Broun acknowledges his familiarity with the questions that others have been asking. In any case, he's only promoting an image of ignorance if he's claiming to be unaware of the birth certificate that has been available online for almost two years.

The other possibility is that Broun is aware of the existence of this evidence, but for some reason, does not consider it to be decisive "one way or the other." Is Broun expressing doubt as to the authenticity or reliability of the available evidence? Does he subscribe to the conspiracist view that Obama's family and/or the state of Hawaii have been engaged in a conspiracy to cover up a non-Hawaiian birth? Is he suggesting that the evidence should be doubted in the face of baseless online rumor? What does Broun mean by this obvious falsehood?
Posted by Loren at 1:38 PM No comments: 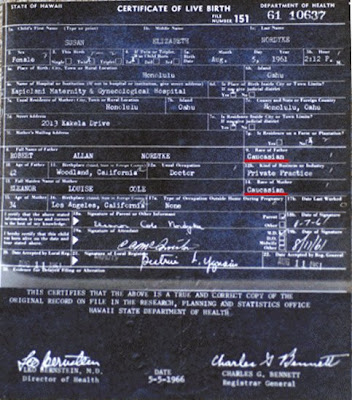 So why does this canard continue to be repeated, seven months after the Nordyke certificates should have put this to rest forever? Because Birthers don't pay attention to evidence, and don't allow contrary evidence to affect their postitions.
Posted by Loren at 3:16 PM No comments: