Andy Martin is not a Natural Born Citizen!?


Obama is a U. S. Citizen and became one at birth. He is not and could not become an NBC...

Obama is ineligible by his own admission. He claims his father was Barack Hussein Obama BHO from Kenya. Ironically, Obama’s case illustrates exactly what the founders were trying to prevent: a drive-by president.

This convenient definition reiterates a position that Martin took in an interview last month:


Martin also said President Obama violates the constitutional requirement the President be a natural born citizen, because his father was a Kenyan national, so both his parents were not U.S. citizens.

KITV4 asked him if the child of an immigrant should not be the president of United States. "If his parents didn't meet the natural-born test when he was born, personally, I would enforce the constitution, yes,” he said.

Martin, it seems, has firmly staked his ground with those who allege that to be a "natural born citizen," and to thus be eligible to be the President of the United States, one must be born to two U.S. citizen parents.

Ralph Martin-Trigona, Andy's father, was not born in the United States. And according to U.S. immigration records, Ralph naturalized as a U.S. citizen in 1950: 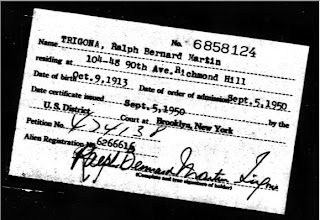 Did the definition of "natural born citizen" change since 2000? Is Andy Martin attempting to hold Obama to a different definitional standard than himself?

Or was Andy Martin, the son of a foreign citizen, attempting his own usurpation of the American government?

The answer is, of course, that Andy Martin is indeed a natural born citizen, because his parents' citizenship is irrelevant. And just as his father's citizenship in 1945 has no bearing on Martin's eligibility, so too does Barack Obama Sr's citizenship have no bearing on President Obama's eligibility. Mr. Martin is free to run for President, but it is hypocritical to apply a different legal standard to Obama than he applies to himself.
Posted by Loren at 6:32 PM 1 comment:

John Charles Frémont was the Republican Party's very first nominee for President of the United States, in 1856. Born in Savannah, Georgia in 1813, he was the son of Charles Fremon and Anne Beverley Whiting.


The traditional narrative holds that Frémont's father, Charles Fremon, was a French immigrant who had fought in the French Revolution. However, according to Andrew F. Rolle, author of John Charles Frémont: Character As Destiny, Frémont's father was actually born Louis-René Frémont in Quebec, Canada. Either way, Rolle reports that after some years of imprisonment overseas, the elder Frémont arrived in Virginia around 1810, and after arriving in Richmond, he began a relationship with Anne Whiting.


John Charles Frémont was born to these two on January 21, 1813. Rolle refers to Charles Fremon as Anne's "foreign lover," and gives no indication whatsoever that he ever naturalized as a U.S. citizen at any time prior to his death in 1818. Moreover, the scandalous origins of Frémont's father were hardly hidden from the public.


Thus, John Charles Frémont, the first Republican Presidential candidate in U.S. history and a man born a scant 26 years after the adoption of the U.S. Constitution, was himself the son of a non-U.S. citizen father. Just like Barack Obama. And just as the citizenship of Frémont's father was no Constitutional impediment to his eligibility, neither is Obama Senior's an obstacle to his son's.


The question then is: will the 'Birthers' accept this as evidence that their favored definition of "natural born citizen" is wrong, or will they attempt to retroactively declare America's first Republican Presidential candidate to be an attempted foreign usurper?

I'm going to take a break from Birtherism to address a widely-circulated photo of Obama smoking. Normally I don't deal with random Obama rumors, but considering that I believed this one for over a year myself, I feel it's worth sharing with others.
Chances are, if you're reading this blog, you've seen this image of President Obama at some point in the past couple of years:

I never scrutinized the photo, and given that Obama is known to smoke, I didn't give much thought to its authenticity. But as it turns out, it is just a Photoshopped fake.

Unlike Polarik and his ilk, I'm not going to establish this forgery though extensive amateur-hour pseudo-document analysis. I'm just going to show you this:

That's an original image from the Illinois News Bureau on August 5, 2004. With a little cropping, flipping, and pasting, the fake image was created. Notice that in the smoking photo, the button on Obama's shirt collar is on the wrong side. And now the Photoshopped image is plastered all over the web, with almost no one acknowledging that it's a total fake.

The Museum of Hoaxes also addressed this photo some time back. And the image above is from AngryWhiteboy.com, where it was posted in February 2007, the earliest usage I've found.
Posted by Loren at 5:30 PM 8 comments: