It seems that someone (namely, someone I will be addressing more directly in my next post) has accused me of 'relying on anonymity' in writing this blog. I wasn't aware that I was doing so. I post under my real first name, and anybody with a modicum of web-fu could figure out my last name within seconds. I hadn't said any more because I didn't think anybody really cared to know more about who I am.

But if I'm going to be attacked on flimsy claims of 'anonymity,' I might as well nip that in the bud now.

I am, as previously mentioned, Loren. I'm a 30-year-old Atlanta attorney, and lifelong Georgia native. I'm a comic geek and a Presbyterian. I've run for Congress twice as a write-in. I have a long underattended political blog at www.socialinsecurity.net.

Two of those sites should clue you in to the fact that I'm no liberal. For one, I hate, hate, Social Security. Politically, I'm a libertarian, or more accurately, a classical liberal. And, like I stated in my first post here, I didn't vote for Barack Obama in November. Rather, I voted for Bob Barr; here's a photo of me with Mr. Barr: 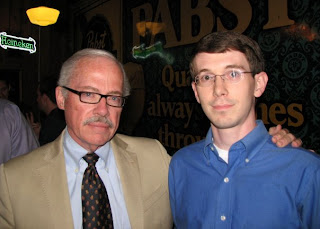 While I imagine many of my readers may differ from me, I'm not pro-Obama myself. Politically, I differ with him on a LOT. Especially Social Security. But this site isn't pro-Obama; it's anti-idiocy. I'm not here to defend Obama's policy decisions or badmouth conservatives. I'm about highlighting the unintentionally humorous absurdities that can result when people let their partisan desires overrun their rational instincts. It's apparently not enough for some people to simply say that Obama is wrong on a political issue; no, he has to be an adulterous, murderous, fascist foreign-born grandson of sleeper Communists, and there's a labyrinthine conspiracy to keep all of the evidence of this from the American people.

If you have any questions, feel free to ask them in the comments section.
Posted by Loren at 3:37 PM