If you're on this blog, there's a decent chance you've heard about WorldNetDaily's Petition for Public Release of Barack Obama's Birth Certificate. WND is quite proud of this thing, currently bragging on their front page that 210,000 people have signed their petition. Birthers cite it all the time as evidence that there's actually a groundswell of support for their cause.

So tonight, I engaged in a little experiment. Here's a screenshot of the petition, taken at 4:36 pm EST tonight: 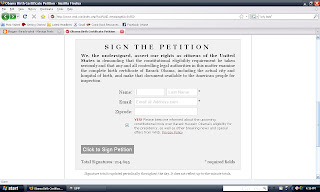 You can see that at the time, the petition reflected 214,295 signatures. Granted, the page states that the total is updated periodically, so I took another screenshot at 4:57 pm EST, when the total was given as 214,705: 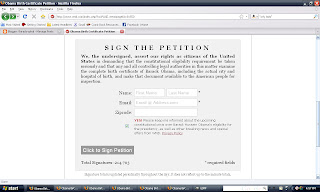 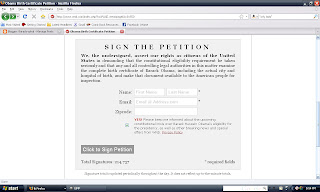 In the interim I surfed around a bit, created an Amazon listing, watched some Battlestar Galactica webisodes, and created 43 tabs over four Firefox windows that looked like this: 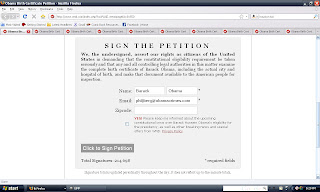 43 ready-to-go tabs for WND's petition, every one with the signatory name of "Barack Obama" himself, and every one with Phil Berg's e-mail address. I unchecked the little "YES!" box on each one, too.

And why 43? Not only is it the Hitchhiker's Guide answer +1, but it's also a sufficiently large number to prove my point, but also small enough that I don't need to set up 100+ tabs. Entering that info 43 times was kinda repetitive, even with Firefox's help.

Anyhow, right after 6:00 pm EST, it was time to give it a go. Here's the final screenshot, taken moments before I began submitting petition entries. For extra authentication, I put a shrunken window of the US time.gov clock on the screen. At a few seconds past 6:01 pm EST, the total was 214,738. 43 signatures in about 1 hour, 25 minutes, an average of about 1 signature every 2 minutes: 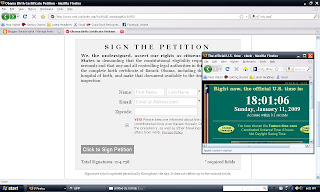 I started clicking petition submission buttons, and a couple of minutes later, I refreshed that original control window (which I didn't use to sign the petition), and it said this: 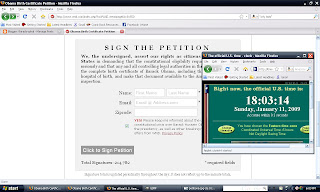 214,782. 44 signatures in 2 minutes, 8 seconds. A rather statistically improbable yet coincidental increase, wouldn't you say? An increase that reflected every one of the 43 applications I submitted, plus one additional one that reflects the average submission rate I noted above. An increase of the total during the 2 minutes of my experiment that matched the increase of the previous hour-and-a-half combined. So not only can you sign WND's petition multiple times, and not only you can sign it with the same name dozens of times within a couple of minutes, but you can sign it dozens of times within a couple of minutes even if you use the name of the President-Elect himself.

Here's one last screenshot, taken at 6:37 pm EST, after I've taken the time to upload images and type this post: 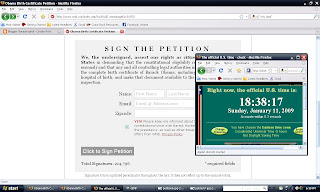 It's been over half an hour since my little experiment, and the total has only increased another 14 signatures.

So if you put any stock in the validity of this petition, take a moment to reconsider. And after that moment, take another one to reconsider exactly how much faith you should put in WND and Joseph Farah for attempting to snooker their readers like this.
Posted by Loren at 6:42 PM