In my first full post on Joel Gilbert and his pseudo-documentary Dreams From My Real Father, I showed how Gilbert has a history of rewriting the past when it comes to his movies. I noted below that Joel Gilbert keeps changing the claims on his website to avoid admitting that he's been discredited.

But what I discovered in reviewing Dreams From My Real Father on Netflix Streaming is that he's actually changed the movie itself.

Approximately one minute into the film appears a "Director's Note." It's basically a disclaimer, and it reads not unlike the disclaimers in Kevin Trudeau's fake-medical-advice books. Here's what it says on the DVD:

"This film's contents are based on actual events, interviews, and archives, as well as re-creations of probable events, using reasoned logic, speculation, and approximated conversations in an attempt provide a cohesive understanding of Obama's history.

"Is this the true story Barack Obama should have told, revealing his true political foundations and his agenda for fundamentally transforming America?"

Talking Points Media quoted this disclaimer back in May 2012. So did Gilbert fan Jack Cashill. Here's a screenshot from the film itself: 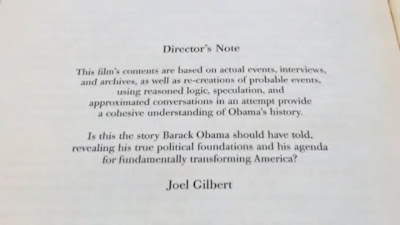 But that's not what you see if you watch the movie on Netflix, where it was made available for streaming just a few weeks ago. Rather, the Netflix version of the film carries this "Director's Note": 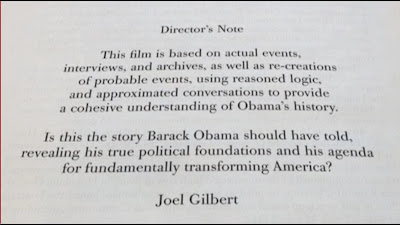 Notice the difference? Look what follows the words "reasoned logic" in the first sentence.

Apparently, the original DVD version of Dreams From My Real Father was based on "speculation," but the Netflix version isn't.