Fever Dreams From My Real Father #2: "Anne" vs. Ann 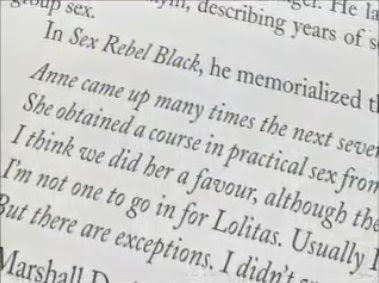 The following scene begins at approximately 22:30 in Dreams From My Real Father:

"In Sex Rebel Black, I think he [Frank Marshall Davis] memorialized the encounters with my [Obama's] mom.

"Anne came up many times the next several weeks.
She obtained a course in practical sex from experienced and considerate practitioners.
I think we did her a favour, although the pleasure was mutual.
I’m not one to go in for Lolitas. Usually I'd rather not bed a babe under 20.
But there are exceptions. I didn't want to disappoint the trusting child."

Joel Gilbert has repeated this claim in interviews, both on the radio and in an April 2012 article by Jerome Corsi at WorldNetDaily:

It should not surprise the reader at this point that Gilbert is being incredibly disingenuous in this claim, in multiple respects. It is critical here to note that immediately prior to the film scene quoted above, Gilbert shows and even highlights in yellow portions of actual scanned pages from Sex Rebel Black. This is not merely second-hand rumor that he is repeating uncritically; he has seen and read the relevant material from Sex Rebel Black, and knows full-well what he's misrepresenting.

To begin with, although the screenshot above shows how the movie seems to depict a single, uninterrupted quote from the book, that is not at all the case. The quoted words from Sex Rebel Black that are seen and spoken by the narrator are taken from two different parts of Chapter Seven, the chapter that discusses "Anne." The first two sentences are taken from page 76; the latter sentences from page 72:

This is what appears on page 76, with the words quoted by Gilbert bolded:

Anne came up many times the next several weeks, her aunt thinking she was in good hands. Actually, she was. She obtained a course in practical sex from experienced and considerate practitioners rather than from ignorant, insensitive neophytes. Neither of us would have thought of voluntarily breaking her in at thirteen, but she was already on the way toward leading an active sex life.

Notice how Gilbert cuts out the latter half of the first sentence, which refers to Anne's "aunt," and the words that follow the second, including her stated age of "thirteen," and thus would be obviously inconsistent with the theory he's presenting.

Then, from four pages earlier, on page 72, the rest of Gilbert's blockquote:

I think we did her a favour, although the pleasure was mutual. I’m not one to go in for Lolitas. Usually I'd rather not bed a babe under 20. But there are exceptions. I didn't want to disappoint the trusting child.

That is merely how Gilbert has misrepresented the very text he's put onscreen. Does his theory that "Anne" is actually Ann Dunham hold any water? Are "Anne" and Ann at all similar? Not in the slightest.

Davis actually describes "Anne" in considerable detail in Chapter Seven, and in every single respect she is wholly unlike Ann Dunham. Moreover every contextual detail about the setting makes it impossible that "Anne" could be Ann Dunham. To wit:

If that wasn't enough, Davis further undermines Gilbert's theory on page 75, where he acknowledges that he and "Anne" never actually completed any act of sexual intercourse. Were Davis to have fathered a child with "Anne," it would have been an immaculate conception.

Davis describes what happened on "Anne" on page 78, in the final paragraphs of Chapter Seven, and again it bears no resemblance whatsoever to the life of Ann Dunham:

The clouds of World War II hovered and Anne's aunt had already announced she would be returned to her family in Jamaica while transportation was still possible. She left shortly after the run-in with Doris.

Later I learned that soon after reaching home she was knocked up by a Chinese merchant who paid her several thousand dollars to keep quiet. After V-J day in 1945 she returned to the U.S....she became engaged several times in California and Chicago only to have her fiances back out...

I saw her once on a crowded elevated train in 1947, but had no opportunity for more than a hurried hello. She smiled warmly and returned my greeting. Maybe it was best that I didn't talk with her; as stunning and ripe as she looked at twenty-one I would have tried to resume where we left off a few years before. I have never seen her since, nor have I ever bedded another nymphet.

In sum, absolutely nothing about "Anne" resembles Ann Dunham, except the pronunciation of their first names. When Ann Dunham first moved to Hawaii in 1960, she was a seventeen-year-old white girl from Kansas who lived with her parents in a house several miles from Davis; whereas "Anne" was a thirteen-year old mixed-race girl from Jamaica who lived in a Chicago apartment with her aunt prior to World War II, who was impregnated by a Chinese merchant in Jamaica, and who he never saw again after 1947. If Davis were writing about Ann Dunham, it would mean that he changed absolutely every aspect of the setting for his encounter with her, as well as every personal detail about Ann except her name.

More importantly, Gilbert knows every bit of this. His film actually shows pictures of pages 71 through 73, carefully cropped so as not to share any of the above-cited inconsistencies. The 'quote' he puts onscreen and has read aloud by his narrator is cobbled together in such a way that shows he's not only read the chapter, but that he knows what words (i.e., "her aunt") to leave out. He is fully aware how implausible his theory is, but he not only continues to repeat it, but he actively ignored and obscured the overwhelming evidence that contradicts it.

Finally, it is worth noting that Gilbert's claims regarding the "Anne" of Chapter Seven are wholly inconsistent with Gilbert's claims regarding the nude photos he says were taken of Dunham by Davis. Note how even in Gilbert's truncated quote above, Frank still refers to "we" and "practitioners," whereas in the movie, Gilbert has Frank engaging in a one-on-one affair that he wants to hide from his wife. Once again, Gilbert's penchant for dishonesty results in inconsistent stories. In any case, those nude photo claims will be annihilated for good in the final installment of this series. If you haven't been convinced yet of Gilbert's rampant dishonesty and disingenuousness, you will be.