On the radio Tuesday, I stated that I'd be willing to debate Joel Gilbert on the air. I have absolutely ZERO expectation that he'll accept such an offer; he wouldn't let me interview him because he suspected what I knew, and he's certainly smart enough to not voluntarily step into the ring with someone who's already proven six ways from Sunday how dishonest he is. I mean, I've literally written a book on misinformation.

Instead, the best he can hope to do is to make up excuses that might buy him some time, and change the details of his story as part of a move-the-goalposts effort. Even before I'd started debunking his film he'd already demonstrated a propensity for evolving his story. For instance, in the film he claims that Stanley Dunham knew Frank Marshall Davis in 1960 as part of his CIA work, and was responsible for introducing Frank to his daughter Ann and for covering up her pregnancy by Frank. Yet on the radio, Gilbert repeatedly claims that when Ann came back from Indonesia in 1970, she told her dad "Remember that old Communist guy I used to hang out with? I want Barry to be raised by him." As if 1970-Stanley would have no recollection of everything 1960-Stanley knew and did. The stories are completely incompatible, but Gilbert doesn't care. He simply never tells them both together.

Or, take his own website, and how he's changed it in response to my very own posts on this blog. As I've proven, with greater and greater illustration, just how false Gilbert's claims are about the publication of his 'nude photos,' Gilbert has reacted by editing his website to change his story.

Here's a visual aid to show exactly how he's been altering his story as it appears on his Breaking News #2 page: 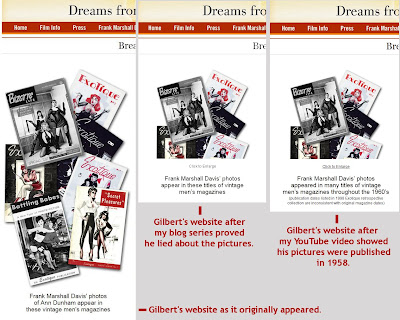 Of course, then I showed, on video, that his own pictures appeared in Exotique #23, published in early 1958. Moreover, Exotique stopped publication in 1959. Yet his little graphic there is showing FOUR covers of Exotique, even though he's still claiming the photos were TAKEN in 1960. So he changed his story again, so it now claims that the pictures appeared just in these sorts of men's magazines, not the specific titles.

Moreover, now he's also added a subscript claiming that my reprint collection shows incorrect dates. He provides no evidence of this, and for good reason: he's lying again. I didn't show the dates as represented in the book's introduction, or in the table of contents; I showed the copyright dates as they appeared on the reprinted pages from the original magazines. The collection didn't change the copyright dates on the reprinted pages; that would be silly. But Gilbert has backed himself into a corner at this point, and he's just making up whatever lies he can to avoid admitting his deception.