No matter how thoroughly I puncture Gilbert's credibility, I'm sure there will be some people who will respond with "But you didn't disprove every single thing in the movie," as if it were necessary to do an item-by-item refutation of every assertion in an hour-and-a-half long movie.

Sorry, but I'm not doing that. For one, that's more trouble than it's worth. For another, Dreams From My Real Father is so devoid of anything resembling substantive evidence that 90% of the itemized rebuttals would consist of me saying "Gilbert provided absolutely no support for this statement; meanwhile, the available evidence says..."

Or to put it another way, factchecking spin and misrepresentations can be useful. But Dreams From My Real Father is mostly just fiction, and factchecking fiction is a waste of time.

And yet there are still instances where Gilbert does make some easily fact-checkable statements...and he's easily proven wrong. Let's look at several.

First, during the "Gramps was a CIA operative" portion of the film, the 'Obama' narrator says:

"Arriving in Honolulu from Kenya in August of 1959 was Barack Hussein Obama...He was welcomed at Hickham Air Force Base by none other than my grandfather, in a traditional Hawaiian ceremony."

This photo accompanying that line is this:

But that photo's not from 1959, and it's not from a welcome ceremony. (It's also far from certain that the white man is Stanley Dunham.) No, that photo first appeared online at CBSnews.com in 2008, where it's explained "Obama's father, Barack Obama Sr., center, is shown wearing floral leis on his graduation day at the University of Hawaii in the early 1960s."

And if Gilbert thinks CBS was wrong, then he still provides absolutely nothing to support that, or to support his assertion that it's from 1959. More likely, Gilbert simply saw where the photo's been passed around by Birthers claiming it's a welcome party (this erroneous claim appeared in the Wayne Madsen article that Gilbert has previously pulled from), and didn't bother to check the facts.

Second, as mentioned in Part 4:

There's only one window visible in the pin-up photos. And it has a bottom sill that's roughly two feet off the ground, not "low to the floorboards." Gilbert can't even describe the pin-up photos correctly.

And the notion that tall and narrow windows are "a design unique to English Tudor style houses"? Gilbert has apparently been in very few apartment buildings.

Third, also as discussed in Part 4:

As illustrated in his documentary, Gilbert found a newspaper photograph of Davis sitting on a couch in his living room that appears to be an exact match for the couch seen in the pin-up photographs.

The film shows this newspaper photograph. It shows Davis sitting on a couch that has separate cushions along the back. The couch in the pin-up photos does NOT have separate cushions; it merely has a raised seam. You can't even see the whole couch, but just the minimal portion we do see shows that it's not the same couch. 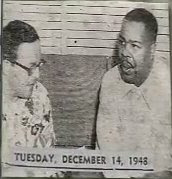 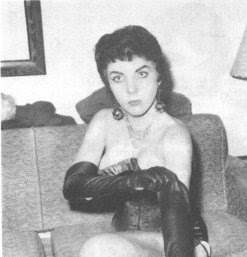 Fourth, Gilbert dabbles in Birtherism in the film:

So if Gramps told the DoH that the father was "Unknown" just a few days after August 4, then that creates a real mystery as to why the newspaper announcements on August 13 and 14 declared that a son was born on August 4 to "Mr. and Mrs. Barack H. Obama."

Gilbert, of course, resolves this conflict with one of the typical conspiracist tricks: by completely ignoring that the newspaper announcements exist.

Fifth, from later in the film:

Thomas Ayers had arranged a job at the firm for Bernardine Dohrn, where she worked with Michelle Robinson. They were friends. When Bill's dad got me a summer intern position at Sidley Austin, Bernardine told me Michelle might be a good match...When I married her a few years later, I married my father. I called her my "bitter half."

It's odd that Bernardine could introduce Obama to Michelle at work, since Obama's internship was in the summer of 1989 and Bernardine had stopped working at Sidley Austin in 1988.

Also odd: the implicit suggestion that after Michelle Malkin started a one-woman habit of referring to Michelle as Obama's "bitter half" in 2008, Obama went back in time and started using that negative term himself. (And lest this is defended as a joke, remember the Gilbert quote from my first post, where he says the film is about telling the truth, not entertainment.)

Sixth, in the course of talking about Obama's role in voter registration efforts in Chicago:

Later, eight of the nineteen 9/11 hijackers were registered under Motor Voter.

This is a common claim among 9/11 conspiracy theorists, and there is no shortage of websites that repeat it, but it has no actual basis in fact. This rumor can be traced back to the (incorrect) claim that the hijackers may have been able to register to vote; but there's no evidence that any of them actually were. And in fact, they weren't eligible to register at all; the original rumor resulted from a misunderstanding of the law. For a guy who's (rightfully) dismissive of 9/11 Trutherism, here Gilbert is just regurgitating one of the Truthers' own cherished myths.

And finally, about seven minutes from the end of the film, there's a montage with this quote from an Obama speech playing over it:

"There are millions of working families in this country who are now forced to take their children to food banks for a decent meal. The free market, it doesn't work. It has never worked."

But it's not. Rather, it's cobbled together from no fewer than three different portions of Obama's speech. They're not even in the same order. The first sentence is from the 23:23 minute mark in the linked video. The three words "The free market" are from 11:00. And "it doesn't work. It has never worked" is from 16:18.

Yes, Gilbert actually splices the subject of one sentence onto the predicate of another. Then he follows *that* with a line from 20:50, and finishes with a sentence taken from 38:18. It's a Frankenstein quotation, stitched together from five disparate parts of a speech, but with the seams hidden by visual cutaways to unrelated images.

This, of course, is just a tiny sampling of the myriad falsehoods that are liberally sprinkled through Dreams From My Real Father. Gilbert doesn't merely relate imaginary stories or cite to unproduced evidence, but he also gets the facts wrong. A lot.

And as will be discussed tomorrow, there's nowhere that Gilbert's falsehoods are more blatant than at the very heart of his thesis.