One of pieces of 'evidence' that Gilbert features most prominently, and which has been part of the "Davis is Obama's secret daddy" claims for over four years, is that the two men supposedly look alike.

Most photo comparisons of Obama and Davis involve pictures where the two men are posed similarly; when they're not, you get results like the one seen above. I, and I daresay most people, don't see any greater resemblance between the two men than would be present between *any* two random African American men. (The absurd 'Malcolm X as father' claim at least has the benefit of the two men looking slightly similar.)

Still, if someone is primed to see a resemblance, I don't really feel like wasting words trying to convince them otherwise, any more than I'd be interested in debating a viewer of Gilbert's Paul McCartney Really Is Dead movie that the secret messages they hear in backwards lyrics are just pareidolia.

For instance, does Obama look that much more like Frank Marshall Davis than he does, say, another famous Davis? 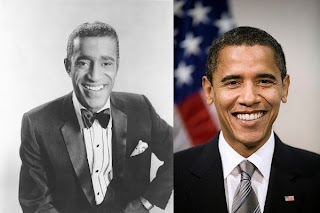 Still, maybe even the true believers can consider this: Frank Marshall Davis and Barack Obama Sr. each had other children. More to the point, each had a mixed-race son named Mark. Mark Davis was the son of Frank Marshall Davis and his second wife, Helen Canfield. Mark Ndesandjo was the son of Barack Obama Sr. and his wife Ruth Ndesandjo. Below is a picture of Obama with the two Marks:

You can decide for yourself which Mark the President bears a stronger resemblance to, and who you think is more likely to be his half-brother.