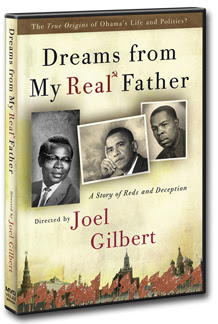 Joel Gilbert's direct-to-DVD movie Dreams From My Real Father is to the Obama Birther movement what Dylan Avery's Loose Change was to the 9/11 Truthers. It is a slickly-polished piece of propaganda, designed to promote a fringe conspiracy theory through the presentation of extensive misinformation. But whereas Loose Change has inspired extensive, point-by-point debunkings, it's doubtful that anyone will ever give Gilbert's film that much attention. Not because it's *good* mind you, but simply because it's just that unimportant.

Or like one man said of the 9/11 Truthers, the political and spiritual predecessors to the Obama Birthers, "The very idea of the 9/11 Truth Movement, that the US was behind the attacks, is such utter nonsense that a film to debunk this theory is unnecessary." Ironically, that man was Joel Gilbert.

And yet, for the next few days, I'm going to be doing just that on a much more limited basis. Because although Gilbert may not be worthy of the effort, his claim of spending hundreds of thousands of dollars to send free DVD copies to unsuspecting voters means that this is a fringe production with a promotion budget that is respectably mainstream. Moreover, Gilbert refuses to disclose who is funding this effort. So if some anonymous benefactor is willing to spend a half-million to raise public awareness of Gilbert's claims, I can afford a little time to demonstrate why he's untrustworthy and his claims are crap.

First, for the unfamiliar, Dreams From My Real Father is a DVD 'documentary' written and directed by Joel Gilbert. Its central thesis is that President Barack Obama is not actually the son of the man he says is his father, Barack Hussein Obama of Kenya. Rather, Gilbert proposes that Obama's *true* biological father is the African American poet and one-time Communist activist Frank Marshall Davis. Davis was a known friend of Obama's grandfather when Obama was young, but Gilbert says that Davis was much more, and he lays out his theory that Obama's mother and grandparents engaged in a multi-decade ruse to cover up the truth about Obama's paternity. Further details can be seen in Gilbert's promotional video and on Gilbert's website.

Then in September 2008, another new rumor was created at the right-wing website The Astute Bloggers. On September 1, site owner 'Reliapundit' complained about conspiracy theories that were circulating at the time regarding the parentage of Sarah Palin's infant child, and in response posed the question "OBAMA'S TRUE PARENTAGE: IS BARACK OBAMA REALLY THE BIOLOGICAL SON OF FRANK MARSHALL DAVIS?"

In isolation the post would seem to be little more than a satirical response to the ugly and baseless allegations that were being thrown at Palin. But Reliapundit didn't stop there. On September 13 he was arguing that Obama looks more like Davis than Obama Sr., and by September 30 he had assembled a list of questions that he suggested supported a secret father-son relationship between Davis and then-candidate Obama. (Nearly all of the points in the September 30, 2008 post at The Astute Bloggers are also in Gilbert's 2012 movie.)

Then on October 22, 2008, Reliapundit resorted to full-on "slut-shaming," publishing three nude photographs that he claimed were of Obama's mother as a teenager, and suggesting that the photos were taken by Frank Marshall Davis. These photos (which a watermark indicates were from "free-vintage-porn.com") are the cornerstone of Gilbert's movie.

(Right-wing blogger Pamela Geller made a seemingly unrelated post on October 24 offering up an even more outrageous theory about Obama's paternity: that he was actually the secret, out-of-wedlock son of civil rights activist Malcolm X. Whereas Martin and Reliapundit at least had the benefit of young Obama having known Davis, Geller doesn't expend much effort explaining how Obama's mother in Hawaii could have ever even met the New York-based Malcolm X.)

Since 2008, the rumor has mostly just floated around the internet, garnering a relatively insignificant following until Gilbert made it the focus of his movie. The news media has continued, justifiably, to ignore it, except to the extent that it is newsworthy: the (purpoted) fact that some unidentified financial backer is paying to have this thing sent to over a million unsuspecting voters.

So during this next week, I'm going to break down the ways in which Gilbert and his film are untrustworthy. It's not going to be a point-by-point debunking; my critique is going to be divided thematically.

Finally, here's a quote to remember in the next few days:

"In my film I'm all about telling the truth. I'm not twisting anything. I'm not entertaining anybody."
- Joel Gilbert, The Peter Boyles Show, Sep. 26, 2012

Gilbert has told the media and the public, repeatedly, that he means for his movie to be taken seriously. That he is credible, that his allegations are substantiated, and that he has the evidence to back them up. In short, that he can be trusted. But extraordinary claims demand extraordinary proof, and Gilbert can't deliver that. I can't promise that I'll convince everyone that Joel Gilbert is a charlatan and his film is a joke, but I think by this time next week, anyone who continues to trust Gilbert has some depressingly low standards for what they'll believe.
Posted by Loren at 6:54 PM