Dreams From My Real Father is not Joel Gilbert's first DVD documentary to present a wild conspiracy theory that attempts to completely rewrite the life of a world-famous individual with stories of cover-ups that extended over whole decades, and claims of astonishing new evidence that Gilbert says he uncovered. In 2010, Gilbert wrote and produced Paul McCartney Really Is Dead: The Last Testament of George Harrison, and in January 2012 he released Elvis Found Alive. Both were projects of Gilbert's production company, Highway 61 Entertainment.

Paul (available on Netflix streaming) makes the case that Paul McCartney died in 1966 and was replaced in the Beatles by a doppleganger. Gilbert's website claims that in 2005, he received a mysterious envelope with no return address, containing two microcasettes that featured George Harrison's extended confession of the cover-up. Images of the envelope and tapes are prominently featured in the film and on the website. In his introduction to the film, Gilbert says that he had the tapes tested by "three different forensic labs." The audio of 'George' is then used as the movie's narration for the following hour and a half.

Elvis, by contrast, argues that the King of Rock and Roll did not die in 1977, but instead faked his death and lived on as a federal drug enforcement agent named "Jon Burrows." As in Paul, Gilbert says he obtained previously-secret evidence to support this claim, this time through a Freedom of Information Act request. Gilbert features himself prominently in the film, as he claims to track down the living Elvis, who he interviews and convinces to record a new album. Somewhat inexplicably, Gilbert's Elvis even rants about Bill Ayers and "Barry Soetoro," conveniently segueing into Gilbert's next project.

Of course, in Dreams From My Real Father, the claim is that President Obama's entire lifestory is fictionalized, beginning before his birth, and that he is the biological and ideological son of poet Frank Marshall Davis. Just as in the other two films, Gilbert has insisted that this movie's claims are also based on astonishing evidence he gathered, even though the movie consists of almost nothing but existing footage and publicly available photos. Whatever extraordinary 'evidence' Gilbert obtained during his supposed trips to Hawaii somehow failed to make it onscreen. And just as Paul was narrated by a supposed George Harrison, and Elvis prominently featured the voiceover of a supposed elderly Mr. Presley, Dreams is narrated by an Obama soundalike.

There are plenty of reviews of these films online, detailing just how ridiculous and fact-impaired they are. The DVDTalk reviews are particularly thorough. One review offered up a description of Gilbert's work that perfectly encapsulates his Dreams as well: "The allegations are so preposterous, we were laughing out loud; had this been evidence offered in a courtroom, we’d have been removed."

With almost no time wasted, Paul gets off to an inauspicious start. Just after the opening montage and before Gilbert's introduction, this establishing shot appears: 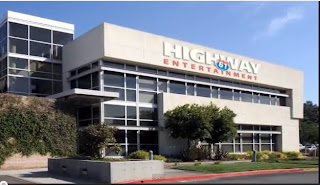 If you think that looks Photoshopped...you're right. It's a stock image of an office building, with a fake "Highway 61 Entertainment" logo slapped on it:

Two minutes in, and Gilbert is already lying to his viewers. (Oh, and to any Birthers reading, that is how you prove something was Photoshopped.)

There's also an intriguing tidbit at the other end of Paul, in the closing credits. Lance Lewman is listed as one of two "Researchers" on the film. Lewman is a professional voiceover artist who just happened to also narrate two of Gilbert's other films: Atomic Jihad and Farewell Israel. If Gilbert simply hired his previous narrator to fake a British accent, then that makes his 'mysterious envelope' story all the more contemptible.

Nowadays, Gilbert would likely defend his Paul and Elvis films on the grounds that they weren't meant to be serious. On the Highway 61 website, they are listed under the category of "Spoofs/Mockumentaries."

That category, however, is a relatively new addition to Gilbert's company website. Previously, Paul and Elvis were promoted as straightforward documentaries, both in the films themselves and in Gilbert's promotional efforts. Gilbert's company website used to list Paul directly alongside his Middle-East documentary Atomic Jihad and one of his Bob Dylan retrospectives. As mentioned above, the introduction to Paul has Gilbert directly telling his audience a story about how he received the mysterious tapes in the mail, and how he spent five years having them scientifically tested. In this interview, Gilbert claims to have commissioned scientific testing on the mysterious tapes he says were mailed to him:

Gilbert: "we do have in L.A. forensic equipment in different film studios that we've worked with as well as somebody who's actually had some experience with the police. We went to three different places, each time trying to get a little more sophisticated in our comparison...we found out that the voice did match up quite well with some recordings and interviews from Harrison from the late '90s that he'd given and that it was extremely close to that. And that's how each time we tried to nail it a little closer to the point where we were told it's a high likelihood it is Harrison."

And, of course, if Paul was just a 'mockumentary' narrated by a George impersonator, then that means Gilbert was lying through his teeth when he discussed all these supposed forensic tests, and the "high likelihood" that it's Harrison's actual voice. In another interview, Gilbert claims his attorney said "the usage of Harrison’s voice is legal because the film is a both journalism and a documentary." Documentary, he said. Not spoof.

Nowhere is Gilbert's subsequent change-of-tune more obvious than on the film websites themselves. 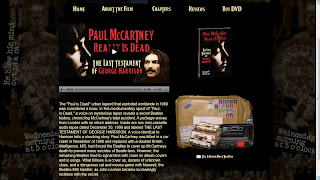 The image to the right shows the Paul website as it appears today. It begins:

The "Paul is Dead" urban legend that exploded worldwide in 1969 was considered a hoax. In this mockumentary spoof of "Paul-Is-Dead," a voice on mysterious tapes reveals a secret Beatles history, chronicling McCartney's fatal accident. A package arrives from London with no return address. Inside are two mini-cassette audio tapes dated December 30, 1999 and labeled THE LAST TESTAMENT OF GEORGE HARRISON...

It plainly says "mockumentary spoof" in the second sentence. But that language wasn't added to the website until sometime after July 2011. The Paul website as it appeared in 2010, both before and after the DVD's September 2010 release, told a different story. It spotlighted Highway 61's role far more prominently, instead of the passive-voice construction of today ("A package arrives" "audio tapes dated"), and it never used the words "mockumentary" or "spoof" at all. Instead, as seen on the bottom right, it advertised the film as being a perfectly serious investigative expose: 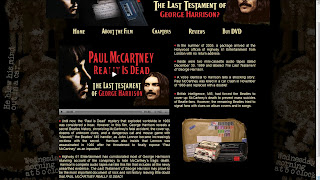 Until now, the “Paul is Dead” mystery that exploded worldwide in 1969 was considered a hoax. However, in this film, George Harrison reveals a secret Beatles history, chronicling McCartney’s fatal accident, the cover up, dozens of unknown clues, and a dangerous cat and mouse game with “Maxwell,” the Beatles’ MI5 handler, as John Lennon became increasingly reckless with the secret. Harrison also insists that Lennon was assassinated in 1980 after he threatened to finally expose "Paul McCartney" as an imposter!

Highway 61 Entertainment has corroborated most of George Harrison’s stunning account of the conspiracy to hide McCartney’s tragic death. Harrison’s complete audio tapes narrate this film that includes all the newly unearthed evidence. The Last Testament of George Harrison may prove to be the most important document of rock and roll history, leaving little doubt that PAUL McCARTNEY REALLY IS DEAD!

What Gilbert says in 2012 is a "mockumentary spoof," in 2010 he was promoting as "the most important document of rock and roll history." Similarly, in 2012, he's claiming that the content of Dreams would earn any journalist a Pulitzer; what will he be saying about it two years from now?

Gilbert did the same rewriting of history with his Elvis movie, but even more blatantly. Here's a screenshot of ElvisFoundAlive.com circa the release of the DVD: 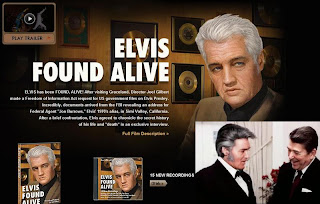 And here is ElvisFoundAlive.com as it appears today: 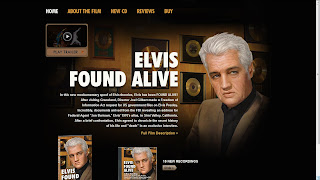 First sentence then: "ELVIS has been FOUND, ALIVE!"

First sentence now: "In this new mockumentary spoof of Elvis theories, Elvis has been FOUND ALIVE!"

And it wasn't just on his individual promotional websites that Gilbert did this. His original press releases and promotional materials treated the films as perfectly serious, and never used the word "mockumentary." Reviews noted that the movies were advertised as "documentaries." The DVD sleeves didn't call themselves "mockumentaries" or "spoofs." And Gilbert gave multiple interviews about the Paul film where he claimed the movie was a completely serious investigative piece, including doubling-down on the 'mysterious envelope' backstory.

Even over at the Internet Movie Database, Gilbert's Paul is today categorized under three genres: "Documentary | Fantasy | Music." But back in September 2010, just after the DVD was released, it had just one genre label: "Documentary."

When one is confronted with questionable evidence, a basic question to always ask is "How credible is the source?" Has he made grand pronouncements before, only to be subsequently proven wrong? Has he made similar mistakes in the past? Does he simply have a history of lying, and recycling the same sorts of lies?

In 2010, Joel Gilbert made a DVD movie about Paul McCartney where he declared to the world that he'd uncovered astonishing new evidence that would rewrite Paul's life as we know it...until he later changed his tune and said that it was just a big joke.

In 2011, Joel Gilbert made a DVD movie about Elvis Presley where he declared to the world that he'd uncovered astonishing new evidence that would rewrite Elvis' life as we know it...until he later changed his tune and said that it was just a big joke.

In 2012, Joel Gilbert made a DVD movie about Barack Obama where he declared to the world that he'd uncovered astonishing new evidence that would rewrite Obama's life as we know it...

...who do you think the joke's on this time?