Why Polland Is Polarik

My identification of pseudo-expert 'Ron Polarik' as statistician/self-proclaimed dating expert Ron Polland has drawn plenty of attention, but also questions about how I can so conclusively state that they are the same person. After all, my post largely consisted of my declaration that they were one and the same, with their similar names and resumes presented as the only real connection between the two. I initially held back additional evidence in anticipation of Polarik's reaction to my announcement, and now that he has reacted, I offer my proof that they are one and the same.

The initial finding that caused me to draw a connection between 'Polarik' and Ron Polland was this: On June 18, 2008, Polarik made a post on the Hannity.com forums. Two months earlier, on April 4, 2008, a poster with the handle of "DrRJP" posted at DanielPipes.org.

Both posts were strongly anti-Obama, while expressing only reluctant support for McCain. Both made Obama's position on Israel a high priority. Both spoke of Obama participating in fundraisers for Islamic causes. Both criticized Obama for his gradual distancing of himself from Reverend Jeremiah Wright. Both criticized Obama for calling his grandmother a "typical white woman."

And then there was this:

This fool is totally convinced that his silver tongued rhetoric can sway terrorists as easily as he swayed Democrats and media pundits. It is the height of hubris and chutzpah to think that the most pernicious and persistent enemy to human freedom can be won over with dialogue.

Obama is totally convinced that his silver tongued rhetoric can sway terrorists as easily as he sway voters. It is the height of hubris and chutzpah to think that the most pernicious and persistent enemy to human freedom can be won over with dialogue.

At the absolute minimum, 'Polarik' is blatantly plagiarizing Polland. The word "demagogery" is even misspelled the same way both times.

Note, however, that this post of Polarik's came only five days after his first appearance on Townhall.com. 'Polarik' did not start calling himself 'Ron' until August. He did not claim a doctorate until September. And he did not claim degrees in "Instructional Systems" and "Educational Research," the specific degrees possessed by Polland, until December.

So 'Polarik' did not start trotting out personal details that mirrored Polland's until, at the earliest, two months after his post at Hannity.com. Polarik cannot claim ignorance of Polland; he was already copying his writing in June 2008. So either he stole his identity, and chose to do so by copying his writing months before he borrowed additional personal info, or they are, and always were, the same person.

So that was the starting point. It was this that allowed me to identify Polland's pre-Polarik online handles, DrRJP and DocRJP.

So what else connects the two?

First, Polarik posted comments on several websites that were able to confirm his IP address. Polland lives in the same metropolitan area associated with this IP address.

Second, both Polland and Polarik have very strong and very similar opinions on Israel. Israel is easily the second most common subject of Polarik posts at FreeRepublic, behind Obama's eligility. Polland has submitted multiple letters to the editor of the Jacksonville Florida Times-Union on the subject of Israel. One letter of Polland's was so inflammatory that the paper actually apologized for running it:

Misinformation, acrimony and a personal attack that could inspire fear for one's safety, marked a recent exchange of letters to the editor. It was typical fodder for the Internet, but a disappointing lapse in the Times-Union's editing process...

There followed a response letter, which Zogby claims was inaccurate, a personal attack on him and perhaps even dangerous in that it could incite those prone to hate crimes to seek him out.

Written by Ron Polland, the letter criticized Zogby for ignoring the fact that terrorists have used American passports to infiltrate Israel. He accused Zogby of "writing denigrating and inflammatory comments about Israel," and much more.

"Shame on him," Zogby said of Polland, a researcher at the University of North Florida who has written several letters critical of Muslims and Palestinians.

"This is the kind of bizarre ranting that occurs on a blog," Zogby said, asking for an apology.

"When it is in print, it has more merit and it should be viewed differently," he said. "I know you have standards. Someone didn't review it carefully."

Polland insisted on the veracity of the things he wrote. Asked to provide references for his assertions, Polland sent links to seven partisan Web sites, including one for the columnist Michelle Malkin. Those sites can be found by entering Zogby's name on a search engine.

"The blogosphere is the source of truth where people can really find out what is going on," Polland said.

Third, Polland is 61. Polarik has described his age as "I got my Masters degree before Krawetz was born, and my Doctorate while he was still in grade school," which puts him in his 60s.

Sixth, both Polland and Polarik have identified themselves as being Jewish.

Eighth, both Polland and Polarik are fans of "Terminator: The Sarah Connor Chronicles." Coincidence, ridiculously overzealous impersonation, or same person? Take your pick.

Ninth, both Polland and Polarik are advocates and defenders of Bulgaria. See #8.

In the 48 hours since my post went online naming Polarik, he has not had much to say on the subject. His only post on the subject had this to say: "Are they saying that I swiped his identity, now? I’ve heard this before. The trolls have been saying for a year now that I have a phony PhD, but this guy’s got a real one." Not a firm, outright denial, but he does refer to Polland as "this guy."

However, that was Polarik's public response. He was not so careful with his words elsewhere. After my post went online, a link to it was sent to Polarik by Steve "koyaan" Eddy, and Polarik responded: 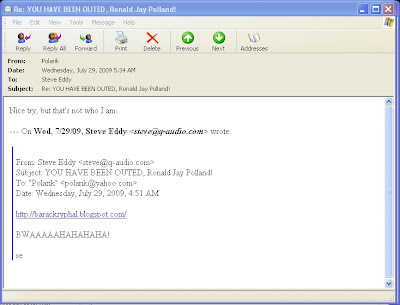 Polarik's response: "Nice try, but that's not who I am."

If true, then Polarik has, for the past year, conducted the most unnecessarily elaborate impersonation of another person that I imagine any of us have ever witnessed. "It was coincidence" is simply not an option, especially after the common writing. And if Polarik is confessing to having effectively impersonated another man for the past year, he's confessing to a most elaborate lie.

Unfortunately, it's not that elaborate. The truth is that when Polarik wrote back "That's not who I am," he was unambiguously, flat-out lying. Ron Polarik is Ron Polland, despite his claim to the contrary. And Ron Polland is Ron Polarik. Once again Polarik has demonstrated his willingness to lie in the face of blatant fact. In only five words Polarik has successfully managed to demonstrate his capacity for dishonesty in even the most straightforward of situations.

Consequently, his 'research' must be viewed through the lens of the fact that it was conducted by a non-expert in computer matters who has a strong history of lying and misrepresenting facts, even about himself. This is precisely the reason why 'TechDude' was summarily dismissed ans non-credible and untrustworthy as soon as he was exposed last year. And it's precisely the reason why 'Polarik' should receive exactly the same treatment now.
Posted by Loren at 12:00 AM