I made it clear previously that I have no intention of meticulously debunking hundreds of pages of argument that "proves" Obama's birth certificate was forged out of two or more real Hawaiian COLBs, one of which may or may not have been Patricia DeCosta's, any more than I ever felt like debunking the books' worth of material from 9/11 Truthers who claimed that the photographic evidence "proved" the Pentagon was hit by a missile and not a plane. I'm especially not going to do it when the person presenting the argument hasn't produced any real forensic credentials, and yet who would fall back on those non-existant forensic credentials as to why my rebuttal shouldn't be trusted anyway.

After all, I have no forensic credentials. I'm an attorney. Granted, I have years of experience with computers, printers, and scanners, and I've read a lot of web pages and even built a few, and while that may be enough for Polarik to claim he's an expert, I have no such pretensions. I'm honest about that upfront.

However, since my central thesis is that Polarik is NOT honest, I'm most interested in demonstrating an occasion when his 'research' was not honest. Particularly one in contrast to an explicit claim of honesty. For instance:

"I HAVE NEVER FABRICATED ONE SINGLE BIT OF MY EVIDENCE. THE ONLY THING I MADE WAS A CLONE OF OBAMA'S FABRICATED COLB. ANYONE WHO SAYS THAT I FABRICATED EVIDENCE IS A LIAR!!"

Amazingly, all three of those sentences are lies.

Polarik's "clone" was presented in this post of July 23, 2008, just a smidgen over a year ago. In it, Polarik claimed that this image... 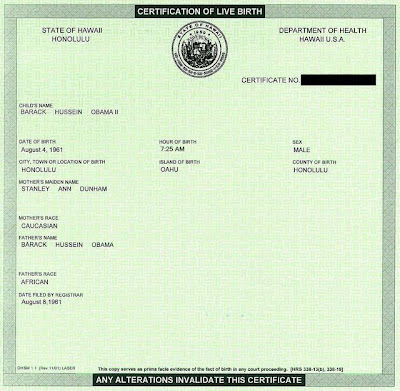 ...was "actually the clone I created more from Michele's 2008 COLB image." He would subsequently describe the creation by saying that "I chose the highest quality image available to me, which was Michele's COLB, and made a bitmap of it. I then edited it, and saved it at a JPG comression of 45 percent."

Keep in mind that this is not a point-for-point clone of the Kos image, since I did not proceed from an original, scanned image (a bitmap that has never been seen by the public), but it's darn close, and nobody was the wiser.

How do you tell my clone from Kos?

I replaced everything, EXCEPT the funky border. Like I said, the "security" border is not very secure when it can be reproduced by a scanner.

Making an exact "forgery" in terms of the Kos image dimensions, file size, JPG compression and resolution was not an easy job, although I spent less about an hour to make it.

I admit there is one kernel of truth in this: he's right about the times.

As for the claims that he created the above image from the "Michele COLB," and that this is "not a point-for-point clone of the Kos image, "I have created some simple illustrations. And I'm going to disclose upfront how I created them. They were all made with GIMP 2.6.6. All the underlying images were taken downloaded directly from the image locations provided on polarik.blogtownhall.com (e.g., the Kos image came from Kos). The underlying images were not manipulated in any way other than resizing, cropping only when noted, and resaving as animated gifs. There was no sharpening, blurring, recoloring, level-adjustment...nothing.

First, I trimmed the excess around the outside of the Michele COLB, to make the borders line up, and resized it to 640x625. I overlaid it with Polarik's "clone" image, allegedly built from it, and got this:

Very noticeably different. Different background, different word placement, different border, missing seal, etc. Polarik apparently did a *lot* of work to turn one into the other, and he did it in under an hour, no less.

Now aside from some difference in clarity, you may not notice at first that *anything* is different. Even the rattan pattern in the background doesn't shift. Compare that to how well Polarik managed to imitate the background in his other attempt at mimickry:

Admittedly, he claimed this was the work of only two minutes, but that was a self-imposed deadline. In attempting a little digital trickery, this is what he produced, and it's the one point of comparison we have for his Photoshopping skills. It's not a very convincing fake, and it was admittedly made directly from the Obama image.

Meanwhile his "clone" was allegedly made from a completely different image, and yet it's ridiculously close. The rattan background is exactly placed. The border is indistinguishable. Every letter of text is exactly the right size and in exactly the right place (except for five).

However, two significant things are different. One, the reverse date stamp that is evident on the Kos is *almost* missing on the "clone." Almost, but not quite. As you can tell, it's mostly missing, but some remnants of it remain around the bottom of the '7,' '6,' and 'N,' in exactly the right places. It's curious that in making his "clone," Polarik would fake the bottom of those three figures, and be careful enough to place them exactly, but not bother with the whole date stamp.

Second, the time has been changed. Not merely the exchange of a '4' and 'P' for a '5' and 'A,' but the entire time has noticeably moved upwards. And it's conspicuously moved upwards in a way that is mirrored by no other text on the certificate. Here it is cropped and scaled up (notice too how the backgrounds match up):

So when Polarik claimed he never fabricated evidence, he lied. He fabricated his evidence of this "clone." When Polarik claimed the only thing he made was this "clone," he lied. He never made a clone. He took the original Obama image, made a sloppy and incomplete attempt to cover up the date stamp, replaced the time (in not-quite-the-right-place), shrunk the image down to 7% the size of the Kos, and resaved it. And then he falsely claimed that he had mocked it up from the Michele COLB.

Then again, I could be wrong. He might have replaced the time and THEN sloppily attempted to cover up the date stamp.

At the time a year ago, Polarik promised to publish within days "a step by step guide showing exactly how I produced this clone, as well as posting a sampling of all of the dead ends I reached using the explanations professed by the nonbelievers." Not surprisingly, this "step by step guide" never materialized.
Posted by Loren at 11:58 PM