Well, Polarik's back. And rather than just claiming that Obama is the love child of Malcolm X and a Lebanese woman, or pretending that every childhood photo of Obama was faked in Photoshop, now he's spinning a tale that puts himself directly in the story.

The last time I posted about Polarik here (outside of a passing mention in a footnote in "Secret Origin, Part 2") was over a year ago, when he claimed PolitiFact invented a rumor about Obama's middle name. Now he's again trying to shift responsibility for something Birther-related, with a YouTube video and a WorldNetDaily article that claim the White House website linked to a fake Certification of Live Birth that Polarik created on his computer.

Ron's 'evidence' for this is essentially two-fold:

1) The White House blog linked to a black-and-white PDF scan of Obama's COLB that indicates that it was printed off the Snopes website, as it has a Snopes URL at the bottom.

2) An article on the Snopes website used to link to a COLB image in Polarik's Photobucket account.

He goes on at length (as he is wont to do), but that's the core of his claim. The only problem is that even given that both of the above are true, that still doesn't support his conclusion that the White House published and/or circulated an imitation document he'd created.

And Polarik provides absolutely zero evidence to support that conclusion. Rather, much of his argument contradicts it. He shares some charts showing pageviews of his Photobucket account that came from Snopes. But if web surfers are arriving at his account, then they're not looking at an image uploaded to Snopes' server.

Now if I may interrupt my own narrative for a moment, let's go back a year, to June 2010. Polarik posts his own thread at FreeRepublic entitled "**Obama Bombshell** Blue Hawaii: Health Department falsified Obama's birth records!" In it, he wrote:


Sometime between October 31, 2008, and July 27, 2009, the dates of Health Director Chiyome Fukino's two press releases, Hawaii amended Obama's birth record. A brand-new Certificate of Live Birth (not Certification of Live Birth) was issued to him...

When Freepers realized that Polarik wasn't being quite honest with them, he did an about-turn and posted a disclaimer, where he said that he'd posted his fake image to test people to see if they could spot it.

Okay, that aside was to provide some context for how Polarik answered his current detractors. He updated his YouTube description so that it now says:


[ **UPDATE** Last year, I made a 2nd forgery with an obvious flaw in it (a tilted line) to see if people would notice it. They didn't. People are only seeing it now because the White House posted a black & white outline of my prior image (which does not have the flaw).

That outline was made from my image shown in the video, but I left the link alone so that viewers can see the flawed forgery that so many have called a genuine copy of Obama's birth certificate.

You see? Sure, it looks like he was lying, but really he was just using a fake image to test people. Again.

He also added a single word to his original video description, to suit his new and improved story (addition emphasized):


That copy, now posted on WHITEHOUSE.GOV, came from the prior image I created and stored in my Photobucket account

Not that the new narrative makes a lick of sense. In attempting to incorporate various inconvenient facts, Polarik has ended up making the following claim:

That Polarik created a fake COLB and posted it to his Photobucket account. That Snopes downloaded it and uploaded it to their server. That as a 'test', Polarik replaced his original fake with a crappier fake that had a tilted line. And that the White House printed out the original fake from Snopes and gave it to the press.

So now we have TWO Polarik-created fakes, one which has a tilted line and one which he says exists but hasn't shown. Plus an inexplicable scheme to switch out a really good fake for a not-so-good fake to see if people noticed. And a claim that the White House published a fake he created, but not the same fake he originally claimed they published a few days ago.

Still, even as silly as that sounds, is it believable? No. In trying to salvage his story, he simply made it worse.

For starters, one can view Polarik's Photobucket RSS feed to see when images were uploaded. "BO_Birth_Certificate.jpg" was indeed uploaded on March 12, 2011. Rather curiously, images called "Barack Obama's birth certificate (Factcheck copy)" and "Barack Obama's birth certificate (Fight The Smears copy)" were also uploaded the day before on March 11...and they're the same fakes with the tilted line. 'Test' or not, he was certainly out to lie to people about what his uploads represented.

This upload date demonstrates one of the problems with Polarik's new timeline. He uploaded the tilted line fake on March 12, but the White House printout was made on April 25, 2011. Yet the White House image is clearly not the March 12 fake. In fact, Polarik's version 2.0 story is maddeningly irrational; if Snopes had already linked to a fake he created, then why replace it with a more obvious fake? And why, when you go public, do you only brag about Snopes linking to the obvious fake, and not mention the 'prior image' at all until you revise your story?

The feed doesn't show when the original "BO_Birth_Certificate.jpg" was uploaded to Polarik's Photobucket account, but there was indeed a prior image at that URL. However, it wasn't a fake; it was the real thing. Israel Insider linked to it way back on June 24, 2008. Polarik certainly hadn't created a polished fake within two weeks of the original release of the COLB. He simply uploaded the real image, using the same filename that the DailyKos had used. Then in March 2011, for some reason, he replaced it with an imitation.

In browsing my computer files, I found something of note: 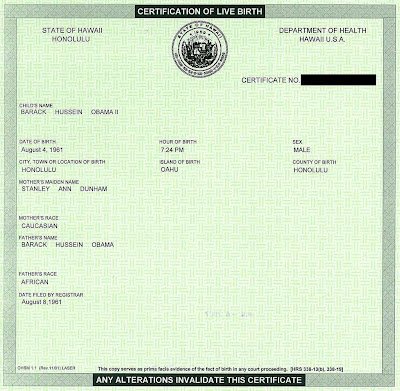 Yep. It's just the plain ol' real COLB. If you open it in a separate window from the tilted line fake, you can see the differences for yourself. This isn't merely a shifting of a line; the entire rattan background changes, as does the border.

So, long story short, what do we have here? Snopes may have linked to a once-legitimate image URL on Polarik's Photobucket account, which Polarik originally uploaded in June 2008 but surreptitiously swapped out for an imitation image in March 2011. (This is a reminder of the risks of hotlinking to outside sites.) The White House printed out a legitimate image that was saved to the Snopes server, said image having nothing at all to do with Polarik's March 2011 fake. There's no evidence whatsoever of Polarik's 'prior' fake that was first mentioned in his revised story. Polarik's first attempt at his story may have gotten published at WND, but its faults caused him to revise it, but the narrative still crumbles under basic scrutiny.
Posted by Loren at 7:28 PM