The Provenance of the "Blaine" Birth Certificate

With this week's release of the long-form, the time seems right to look back at one of the fake birth certificates that has floated around the web. Specifically, this one: 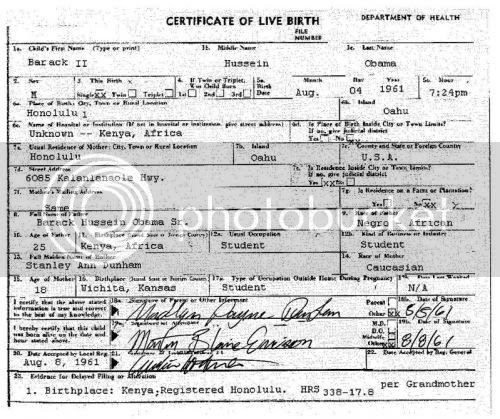 Commonly dubbed the "Blaine document," it appears that Orly was responsible for the spread of this starting on October 19, 2009, though she apparently received it from one "William Blaine". Subsequent e-mails from "Blaine" make him appear rather anti-Orly. (Link to Google cache of Orly blog post with emails.)

There are several telling signs of fakery in the document. To cite just one, typed text throughout the document does not maintain horizontal consistency. See Barack/II/Hussein/Obama and Honolulu/1. Text produced on a typewriter would typically not feature such drops, as the typewriter would move in a straight line across the document.

Now compare the above document with this blanked-out certificate:

This redacted image was online at least as early as July 2009, when it appeared in the Western Journalism Center's "Clearing the Smoke" "report." I don't know if it was created for that purpose, but it's definitely the underlying document used to make the "Blaine" certificate.

There are several telling indicators of this. For instance, the "Blaine" document is missing portions of lines around certain boxes, that sync with the lines erased by the redactions in the WJC image. There's the same distinguishing hash mark in Box 7g. And most of all, in Box 21 the words "Signature of Local Registrar," which were partially erased by the white redaction box in the WJC image, are not only identically cut off in the Blaine certificate, but if you look closely, you can see how the words are identically obscured by the top edge of the handwritten signature that has been removed.

And where, in turn, did the WJC image come from? From a blogger who, in June 2008, posted his own Hawaiian birth certificate online:

The distinguishing hash mark in Box 7g? It's there. And so is the overly large signature in Box 21. Additional marks in Boxes 2, 3, 11, 12a, and others further establish that this is the document whose information was redacted to create the WJC image.

So in case the obvious fakery of the Blaine document wasn't enough, now you can also see precisely what legitimate document it was forged from. Additionally, you can see why it's in low-res black-and-white, because recreating and faking the color crosshatch patterns would have been considerably more difficult.

So is the "Blaine document" the creation of an overzealous Birther, or a hoax a la the Bomford certificate?

The latter, as it turns out. I tracked down the individual behind it, the eponymous Mr. "Blaine," who informed me that the document was thrown together one evening to punk Birthers. And although it never gained the widespread attention of the Bomford or Lucas Smith certificates, and although many Birthers dismissed it as fake from the start, it still continues to display occasional signs of life around the web. As we've seen with so many other rumors, it's hard for any bit of wrong information to ever truly die and disappear for good.
Posted by Loren at 11:09 PM