So Steve finally responds to my allegations that he lied by...trying to cover it up. Here's what he wrote on Christmas Eve:

"I have updated my previous post to include the origional image that was to be posted, but swapped to keep Loren Christopher Collins, Obot lawyer and George Soros little hack’s panties in a wad."

An Obot lawyer, who is too stupid and arrogant to realize that the image above, has been resized, by this blog hosting. Has decided to post a comparison image. The image below demonstrates that the FactCheck people used to verify the COLB were not only inexperienced, but were deceptive as well. They were not qualified to even photograph the document and took every effort to decieve anyone looking at it, just like the questionalbe lawyer. Regardless of the level of focus that the deranged lawyer is pawning, there are no defects from the embossing that are visible in other images. Since he can’t explain that away, he’s throwing a temper tantrum.

UPDATE 12/24/2009 As I have posted a new post today I am inserting the origional image that was to go here. Here is the one that I changed from to keep the Obot’s off-guard. The original was to have stated ‘Some degree of being in focus’ and an cropped section showing that even the date was visible. 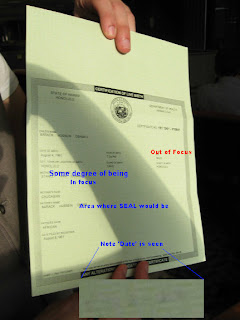 First off, Steve's attempt to blame his blog host for the image resizing completely ignores the fact that Steve, himself, chose not to link to FactCheck's image or website. If WordPress resizes uploaded images (and I'm not sure that it does), Steve still knew that he was presenting his readers with a shrunken image and ONLY a shrunken image.

More importantly, Steve's being inconsistent with his stories. On December 21, he wrote that he himself resized the image: "In reality, I resized the image for posting only a reference image only..." Then three days later, he blames the blog host: "An Obot lawyer, who is too stupid and arrogant to realize that the image above, has been resized, by this blog hosting."

Second, Steve proposes that this new image is the "origional" that he intended to post, but apparently didn't in an effort to smoke me out, or somesuch nonsense. This, of course, ignores that the new words "Some degree of being" are in a different font than "In focus." And they're a different font size. And it means he randomly capitalized "In" for no reason. Yes, I'm sure that this was the original image, and that what we don't have here is Steve altering the image and making up a story to explain away his lie.

Take a step back, and consider the tale that Steve is spinning at this point. He's proposing that his plan was:

1) Before December 13, Steve draws up an illustration saying "Out of focus" and "In focus" in one font, and "Some degree of being" in another font.
2) Steve posts on December 13 the image without "Some degree of being," in the hopes that Loren will spot the lie and call Steve out on it.
3) Loren responds to Steve's post, pointing out where Steve lied in his labeling.
4) Steve makes a follow-up post a week later on December 21 that mocks Loren, but doesn't share this "origional" image and doesn't address the lying allegation.
5) After Loren points out Steve's lie again, then on December 24, eleven days after the original post, Steve posts the "origional" image and declares that it was always his Machiavellian plan to share a phony image in order to get Loren to call Steve a liar and thus link to Steve's page.

Of course, such a ridiculous plan should be no surprise coming from someone whose central thesis involves some vague but elaborate scheming where the Obama campaign swaps out two or three different documents during a FactCheck photo shoot, and the FactCheck folks don't notice.

No wait...the FactCheck agents being innocent dupes was Steve's old conspiracy theory. His new conspiracy theory is: "The image below demonstrates that the FactCheck people used to verify the COLB were not only inexperienced, but were deceptive as well. They were not qualified to even photograph the document and took every effort to decieve anyone looking at it." I admit, it makes it difficult to shoot down someone's conspiracy theory when they keep changing it.

Also, in an effort to fabricate a reason why he lied in the original image, Steve concocts an explanation that totally defeats his initial reason for posting it. Steve's point was that the impressed seal ought to be visible because part of the document was in focus; if the whole document is out-of-focus, only in varying degrees, then that's precisely what I said to start with, and which he called "lies."
Posted by Loren at 6:14 PM