You demonstrate that a supposed "credentialed [forensic] examiner" is anything but, and what reaction do you get? 'Well, he may not actually be an expert, but that doesn't mean his material isn't correct!' And in a very broad sense, that's true.

Granted, it's true in the same sense that the local guy who's "proved" that George W. Bush detonated the World Trade Center *could* be correct, and all the real scientific experts are simply wrong, but it's theoretically possible.

So if only to preempt further complaints that I haven't actually addressed Steve's material, here's a cursory look at why it's conspiratorial hackwork.

(And to be clear upfront, it's a cursory look because I'm not wasting my time taking down every wrongheaded point made over the course of 21 pages.)

My original conclusion stands, that the Date on the COLB was printed on the top when the document was created, by printing out the ‘Fight the Smears’ COLB and then attempting to apply an embossed seal to the document in an attempt to produce a forged Birth Certification. However they produced two completely different documents one with a SEAL and the other without one. I believe they noticed that during the process that the document was missing a SEAL, applied one, and did not catch the image without one till it was too late and already posted.

They are forgeries, plain and simple.

Forgery #1 - The COLB posted on 'Fight the Smears' - No Stamp, No Seal, evidence of tampering and forgery. Sandra Ramsey Lines, Ron Polirak, and myself, among others.

Forgery #2 - FactCheck - Two different COLB's one with a SEAL, however NOT an Official State of Hawaii Department of Health SEAL

Forgery #3 - FactCheck - COLB without a SEAL, image of COLB being held up. High resolution and NO indicating of a SEAL.

Fom this closing breakdown, it's hard to tell how many different forgeries Steve is proposing the Obama campaign generated. "Forgery #2," for instance, is described as being "Two different COLB's." And right after he writes "they produced two completely different documents one with a SEAL and the other without one," explicitly suggesting two "completely different documents," he then immediately turns around and says "they noticed that during the process that the document was missing a SEAL, applied one," which suggests only one paper that was altered mid-photo-shoot. In other words, his theory is not even consistent from sentence to sentence.

"And because of this, If I had been one of the two at FactCheck, I would have seen the discrepincies of the COLB and stated them at that time."

So Steve's thesis is clearly that the FactCheck staffers were fooled. Now in its article, FactCheck wrote:

We beg to differ. FactCheck.org staffers have now seen, touched, examined and photographed the original birth certificate...Claims that the document lacks a raised seal or a signature are false...

[W]e can attest to the fact that it is real and three-dimensional and resides at the Obama headquarters in Chicago. We can assure readers that the certificate does bear a raised seal, and that it's stamped on the back by Hawaii state registrar Alvin T. Onaka (who uses a signature stamp rather than signing individual birth certificates).

To reiterate highlight some of the absurdities of this theory:

And how many photos does Steve allege managed to get past quality control without signs of a seal? Only one. Out of nine photos that FactCheck put online of the COLB, only one shows the area where the seal should be, but where it's not immediately visible to the naked eye.

Now a real expert, or even just a person of reasonable common sense, would chalk this up to factors like how the photo isn't in focus, making it difficult to see a pressure seal, or how it might be obscured somewhat by the shadow. Here, for instance, is how one portion of this JPEG looks, without any modification:

And he expects to see a lightly impressed seal? But no, in Steve's world, "It's blurry" isn't good enough; the seal isn't immediately visible because there was a conspiracy, multiple forgeries, and some remarkably foolish photographers.

It doesn't help Steve's case that he also uncritically repeats the old Polarik canard that the COLB posted at FightTheSmears does not have a seal. This claim always depended upon accepting that the Obama campaign would have sent a COLB image WITH a seal to the Daily Kos (which they did), and then turned around and posted a COLB image WITHOUT a seal on their own site. Why would they post an inferior image to their own site? I imagine that's a question that simply doesn't occur to someone who's willing to believe that they'd produce an inferior image to visiting photographers.

The only difference is that because the FightTheSmears image is considerably smaller than Kos's, the seal is considerably more difficult to see. Even at best only part of the circular seal can be pulled out, but it's there.

I'm not going to go through each of Steve's individual "proofs," but I do want to single out one claim of his. Steve alleges that one or more COLBs (he's somewhat vague on this point) lacks the signature stamp of Alvin Onaka. Here is the image of the back of the COLB, showing the signature stamp: 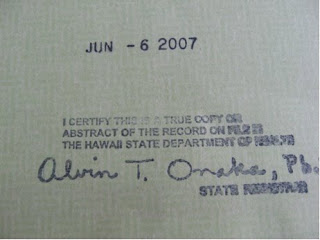 So there you have it. Steve's analysis and theory may be considerably shorter than Polarik's, but it may be even more absurd and unscientific. That's quite a feat.
Posted by Loren at 8:29 AM