The 'Duh' of Steve

I don't intend to make a habit of rebutting Birther 'proofs,' but when one is issued directly at me, how can I not?

Following my critique of Steve Christiansen's excuse for document analysis, Steve wrote a response post with a bunch of new graphics that he claims support his conspiracy theory. I'll jump right in with his first reference to me:

Now we look at an what an Obama supporter claims as false representation on the FactCheck image.

To quote his lies; “Now a real expert, or even just a person of reasonable common sense, would chalk this up to factors like how the photo isn’t in focus, making it difficult to see a pressure seal, or how it might be obscured somewhat by the shadow. Here, for instance, is how one portion of this JPEG looks, without any modification”

The is attempting to take a portion, at the furthest point of the image and state that, ‘that area represents the entire image’.

Steve then links to this COLB picture, which he observes has portions of the document that are in focus and others that are out of focus, and to this image (note: the image below is the exact size of Steve's image, copied from his site):

Steve's utilization of the first image demonstrates only one thing: his seeming ignorance of photography. Of course the seal is in focus and the far side of the document isn't; the camera focused on the seal. It wasn't a deep focus image, so at that distance, the far side is unfocused. This is unsurprising and irrelevant to the issue at hand. And if Steve is aware of the focal issues presented by this shot, it's not clear why he's sharing it at all.

As for the second image, Steve simply resorted to lying. See where he wrote "In focus" in blue on the image? Total hogwash. The reason I pointed out that the above image is the largest size that Steve shared is because the FULL size of the image (as posted by FactCheck and as linked to by myself) conclusively shows that Steve is full of it. The portion of the COLB that Steve calls "In focus" is anything but; only because he shrunk the photo down to approximately three percent of its original size, and conveniently failed to link to the original image size, he's made it impossible for readers to see those details.

Seriously, to illustrate just how much Steve shrunk the image to suit his purposes, and how ridiculously small his image is compared to FactCheck's original photo, here's a side-by-side comparison of how Steve's image compares to the size of the original FactCheck image it's derived from: 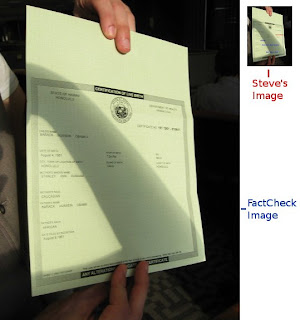 And the part that Steve considers and calls "In focus," but doesn't provide a full-size image of? It would be plainly obvious that it is NOT in focus, if Steve had linked to the actual size. But of course, to do that would have contradicted his own lie. So here it is, actual size: 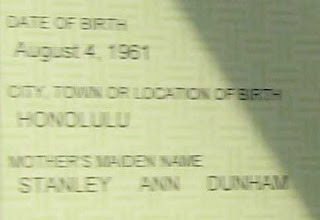 If you think that image is in focus, please make an appointment to see your opthamologist. If you agree that it isn't, then you understand that Steve flat-out lied to his readers. Here, for comparison, is a crop of the same text from the other FactCheck photo that showed the whole document, again actual-size, and this time in focus: 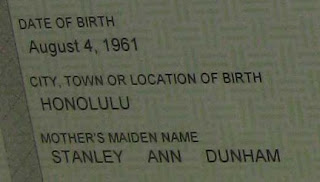 Steve then goes on at length about how the inked date stamp on the back of the COLB doesn't appear to have affected the rattan lines on the document's front. He appears to consider this to be decisive evidence that the document is a forgery, but it's not clear why. It's an ink stamp; it shouldn't affect the texture of anything.

Then he says "The same anomolies and marking across the ‘Blank Hawaiian Template’, The DailyKos image, indicating that the same image was used to create them." Well, yes. Obviously. The 'Blank Hawaiian Template,' as Steve calls it, was made from Obama's COLB, so it shows the same marks. It's not like there was a blank COLB independently floating around the internet. Steve doesn't say where this 'Blank Template' comes from, but IIRC, it was the creation of Jay McKinnon, who admitted creating it from Obama's COLB.

He also repeats his previous claim (which he pontificated on at length in his original 'analysis') that the COLB as posted on Kos should be considered a forgery because you can't see any bleedthrough from the signature inkstamp. Of course, in another post he treated another COLB that similarly had no signature bleedthrough as unquestionably legitimate, which just serves to remind readers that Steve and other Birther 'analysts' pick and choose their evidentiary standards as they go along, without regard for consistency.

Well, that's about it. Inconsistent standards, imagined errors, and flat-out fibs. That's the kind of quality research you can expect from Steve.

Oh, and one final note. Steve repeatedly claims that I have engaged in lies or the misrepresentation of facts. However, he is remarkably vague as to what those specific falsehoods are. He is incapable of saying 'Loren said X, and that's false because the truth is Y,' because I haven't actually lied. So instead, he throws around the allegation as a broad charge, and doesn't back it up with any specifics.

By contrast, where I have above accused Steve of lying, I have been most specific. I identified the specific falsehood he posted ("In focus"), I demonstrated with superior evidence that it was indeed false, and I pointed out that Steve shrewdly manipulated image sizes and omitted relevant links so that his readers would not be able to tell that he was lying without searching out the original image that he didn't provide. And that's just one difference between me and Steve; he may be willing to throw around the 'liar' accusation just to avoid addressing arguments, but if I claim that a statement is a lie, I'm going to actually substantiate that claim.
Posted by Loren at 5:53 PM