As previously reported, WorldNetDaily has been feverishly covering the eBay seller colmado_naranja, and his auctions for the alleged Obama Kenyan Birth Certificate that he claims to have in his possession. There have been plenty of twists in this story, almost entirely on the part of colmado_naranja's own representations, but there's one 'twist' that I'm compelled to cover, and cover immediately.

Here is the latest auction, now reduced to simply auctioning off signed photographs. In it, colmado_naranja ndicates that he intends to upload a video to his YouTube account, InspectorSmith, and posts several photos of himself: 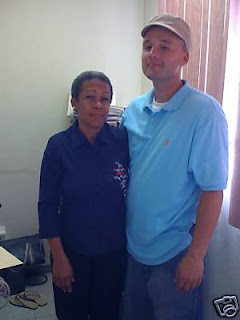 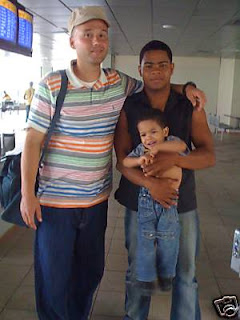 One enterprising Free Republic poster put that name and photo together with the seller's apparent home of Cedar Rapids, Iowa, and stumbled across this photo: That's a CBS Photo of the Day, from a year ago. The caption reads "Lucas Smith rides his bike through the water after checking up on his flooded house in the southwestern area of Cedar Rapids, Iowa, Friday June 13, 2008." It looks an awful lot like colmado_naranja, doesn't it? And it's not an understatement that he has an interesting Wikipedia page. References to "Colmado Scarlette" and a Smith-penned book about the Bush Administration?

So "colmado_naranja" is apparently Lucas Smith, of Cedar Rapids, Iowa. Another quick round of Googling promptly turns up thisstory from the Syracuse Post Standard:

Jim Jr. was born with one kidney. It kept him going for the first 18 years of his life. He rarely missed school, and even felt fine the day a school nurse took his blood pressure and realized something was wrong. Go see a doctor, she told him. Right away...

Jim Jr. was put on the national kidney transplant list in November 2001, five months after doctors diagnosed him with end stage renal disease...

In late 2002, a man from Cedar Rapids, Iowa, sent an e-mail to the family. The man, who called himself Lucas Smith, said he was 23 years old and had emigrated from Russia five years earlier. He had seen the Web site and, Smith said, he wanted to help.

The Wilsons stopped searching for a donor. Smith passed all of the medical, physical and psychological tests. They thought he was going to save their son's life.

Then, on May 3, 2003, Smith sent Jim Wilson Sr. an e-mail saying he wanted to be compensated for donating his kidney.

Wilson said they would pay his airfare, but because it was illegal to receive money for an organ donation, they wouldn't give him any other cash.

Five months after holding out a lifeline, Lucas Smith disappeared.

Bravo, Joseph Farah, for putting this story and this attempt at con-artistry in the limelight. Bravo.

Update (7/3): Another FreeRepublic poster ran Mr. Smith's name through the archives of the Cedar Rapids Gazette, and unsurprisingly, Lucas Smith has a criminal history. Most notably, in 2000 he pled guilty to passing several bad checks after opening a bank account with false information, and in 1998 he received a deferred judgment on a charge of forgery.
Posted by Loren at 10:58 AM